At the higher levels of classification (order and family), Western Australia’s insect fauna is no different from elsewhere in Australia or, indeed, other parts of the world. However, at the lower levels (genus and species), there are many forms that are unique to the State. A few of the more colourful examples are depicted here.

This damselfly is endemic to Western Australia, it is the only species in the genus Miniargiolestes. As the common name suggests it can be found around streams. It is most common from November to January.

This beefly has been reported in Perth and in Lesueur National Park. It has been found on flowering shrubs in November and December. Larval hosts are unknown but most Bombyliidae (beeflies) are predators or parasites of larvae of other insects, such as native bees, caterpillars or wasps.

One of the largest bees occurring in W.A., Dawson’s Bee has a wingspan of up to 4.5 cm. Its range includes the North-West and parts of the Mid-West. Females (distinguished by white hair on the head and thorax) excavate nest burrows in hard bare clay from August to September. A mud turret at the entrance of each burrow serves to keep out loose excavated soil. Males are distinguished by their uniformly brown hair.

A relative of silk moths and emperor moths, this species from south-western Australian is placed in a family of its own (Carthaeidae). Adults have a wing-span of 7.6-10.0 cm and are in flight during October to December. The larvae feed on proteaceous shrubs such as Dryandra , Banksia and Grevillea .

This brilliant little member of the family of ‘blues’ (Lycaenidae) is confined to western coastal areas from Perth to North-West Cape. In the Perth area, adults are in flight from October to December but they emerge as early as July on NW Cape. Wing span approx. 2.5 cm. 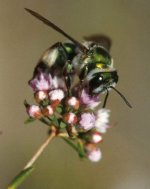 This glorious metallic green species is much larger than a honeybee. It is one of 12 species of its genus and, like most of them, is confined to W.A. It is found in heathlands of the southern wheatbelt and southern goldfields and flies during the spring flowering season. It nests solitarily and its nest entrances are very inconspicuous.

Chasmoptera, with seven species, is confined to south-western Australia. Other genera of spoon-winged lacewings occur in Africa, southern Europe and South America. The common name (spoon-wings) alludes to the stalked hindwings with subapical expansions. One species is still found in bushlands around Perth during November and December. Little is known about the behaviour and life-history of these odd insects. The hind wings of the species pictured measure up to 40 mm in length.

All four species of Mygalopsis are restricted to south-western Australia where they inhabit the wetter heathlands. Males ‘sing’ at night, head down, on the lower stems of shrubs. Adults measure about 4 cm in body length and are notable for their relatively short hind legs and very short wings. Females are distinguished by a sword-like ovipositor.

This is the largest dragonfly found in Western Australia. It is a robust species only slightly less impressive than P. ingentissima from Queensland, which is regarded as the most robust in the world. The larvae, known as nymphs, live in holes dug in swampy ground. They differ from most other nymphs in that they come out of the water, usually at night, to catch prey. The adults emerge in early summer, but are rarely seen. The species is only known from a few localities near Perth.

This is just one of hundreds of species of jewel beetles occurring in WA. Bodies and legs of this species were used in pieces of jewelry in earlier times because their iridescent colour never fades. The species inhabits south-western W.A. from North-West Cape to the southern edge of the Nullarbor Plain. Adults may be found visiting various white flowers during the months of September to December. They measure 1.5 to 2.0 cm in body length.